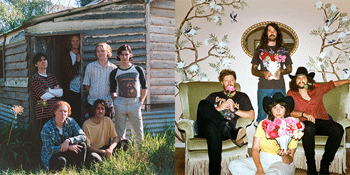 Gasometer Bandroom (Collingwood, VIC)
Friday, 26 November 2021 8:00 pm
41 days away
18 Plus
Australian Artists
Send this event to
Bones and Jones
Bones and Jones are a six-piece band from the Geelong/Surfcoast area who have evolved their sounds from that of 60’s gems, to writing a duplicitous, lush array of songs. With a swag of scintillating live shows under their belt including Boogie & Meadow, New Year’s Evie and Grampians Music Festival, the band have become a must see. They’ve just released their long-awaited album “Ginger Gold” playing sold out shows in Victoria and NSW.
Keep Bones and Jones on your radar, they’re one not to miss!
Caitlin Harnett & The Pony Boys
In 2015 Caitlin Harnett and the Pony Boys formed and have since played a number of shows around Australia, two USA tours with SUSTO and The High Divers and have supported the likes of Tony Joe White, Hurray For The Riff Raff, The Nude Party and The Felice Brothers.

Following the successful release of their critically acclaimed LP ‘Late Night Essentials”, Caitlin Harnett & The Pony Boys have been carving out their own rabid fanbase and a reputation of raucous live shows, seeing them as the winners of Best Live Act in NSW 2020 in the National Live Music Awards.

Late Night Essentials was recorded live over a day in the living room of Joseph Ireland (The Middle East, Joseph Liddy & The Skeleton Horse), layered with saxophone and jangly electric guitars, Caitlin Harnett & The Pony Boys are reviving 70’s Americana in all its glory, but with a modern twist.
“Her voice is like Mazzy Star’s Hope Sandoval was jerked out of a long sleep.” The Guardian
“Lush, Americana-style folk tunes, jangling guitar and a whole lot of honesty.” Sydney Morning Herald