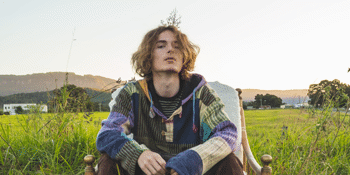 w/ Jasmin Adria
Gasometer (Upstairs) (Collingwood, VIC)
Friday, 11 February 2022 8:00 PM
13 days away
18 Plus
Australian Artists
Send this event to
This year has seen 17 year old singer-songwriter Aodhan build on his list of musical accolades with the July release of his debut album, Flies in My Room, which earned him critical acclaim and media love from the likes of Tone Deaf, Courier Mail, AU Review, and Pilerats. And what a way to cap it all off but by announcing his EP tour of New South Wales and Victoria for early 2022!

Aidan Whitehall (aka Aodhan) has also won over major streaming platforms, with Apple featuring him as the 'Up Next' artist, including a full banner and platform-wide campaign. He received additions to 'Heaps Indie', 'indie + chill', 'Mellow Days,' 'Today's Acoustic,' 'Acoustic Chill' and 'NMD' playlists at Apple, and majors like 'New Music Friday' and 'Original Storytellers' at Spotify. Several tunes from from the EP have reached rotation at Triple J and Unearthed radio, including most recently "Daily Meditation" and "Flies In My Room".

Now he's bringing his talents to the stage in his first ever headline tour, finally getting the chance to tour his debut body of work to Newcastle, Sydney, Melbourne, Gerringong, and Wollongong. Special guests along the way will include Elijah Cairns, Jordan Kenny, Jasmin Adria and Floodway. Be sure to secure your ticket early via the artist site!