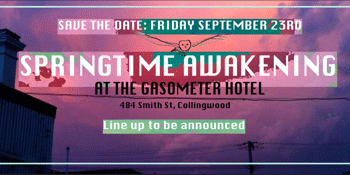 After an extended hibernation, the nocturnal birds of prey converge on the streets of Collingwood, preparing to unleash their underground funk and disco style upon your unsuspecting limbs. Wings Of Tyto will be joined by the soul/Latin/jazz outfit, The Winfield Road Experiment, fresh off their debut record! As well as the Afro-beat flared funk of Mount Kujo on the eve of their debut release. Hallowed Horns will also make an appearance, setting the scene with their darker portrayal of popular genres with their six piece lineup. Conte Milano, Brasstoff and DJ Space Fish will also be providing action packed entertainment.