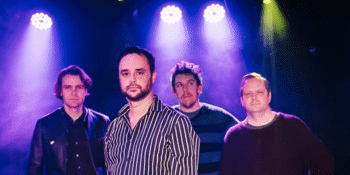 with The Trepids & Ryan Oliver
Gasometer (Upstairs) (Collingwood, VIC)
Thursday, 18 August 2022 7:30 pm
10 days away
18 Plus
Music
Australian Artists
Indie
POP
Rock
Send this event to
A Man Called Son (AMCS) is the ongoing project of Simon Pearlman. Conceived in Brisbane, Simon (guitars/vox/keys and other instruments) initially created AMCS as a home studio project. After a relocation to Melbourne and various lineups over the years, AMCS's current incarnation includes the inimitable Sam James (Guitars/effects), the dapper Thomas Madden (bass) and the zany yet hard-hitting James Rance (drums/percussion).

Since the pandemic, AMCS have been bunkering down putting the finishing touches to their fourth album. The melancholy, 80s atmosphere of first single 'What We Had' was the first fruits of their labour, and was released in November 2020 to rave reviews. AMCS finally released another single in late 2021. The rocking, organ-led 'Plateau' is about the nostalgic comforts of childhood and the refusal to conform to society's norms.

After a jam-packed first half of 2022, A Man Called Son will be kick-starting the second half of 2022 upstairs at The Gasometer on Thursday, 18 August.  They will be joined by the rustic, rootsy sounds of Ryan Oliver and the tasteful rock of The Trepids. A tenner gets you in, but the biggest grin wins.....our undying love, of course.