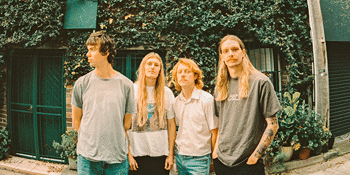 TBA
Gasometer Bandroom (Collingwood, VIC)
Saturday, 24 September 2022 8:00 pm
47 days away
18 Plus
Music
Australian Artists
Indie
POP
Send this event to
The Moving Stills have had a busy year, jam packed with tunes and shows. They released their debut album 'Sunshine Corner' in Jan this year, went on tour with a bunch of Aussie legends including Spacey Jane, Great Gable, Shag Rock and The Vanns. It's safe to say that they've accumulated a bit of hours and kms on the road and in the van.

Along the way, they sold out a bunch of their own headline shows up and down the East Coast and became a viral hit with their Tik Tok video covering Tears For Fears' 'Everybody Wants To Rule The World' that racked up over 240K views.

The Moving Stills have been writing and recording more alt-pop feel-good tunes and are bringing in a new explosive single with 'Volcano'. A bit of fun. A bit of dance, and a sprinkle of summer.